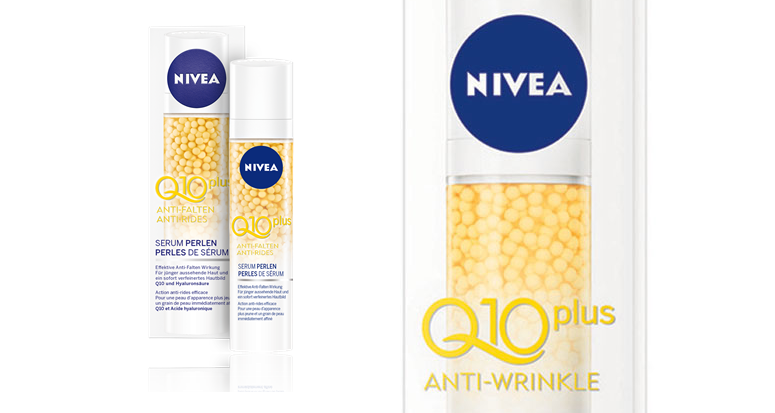 Nivea is launching this September 2014 a new product under its star range Q10Plus : a new serum with an impressive visual aspect, transparent gel full of yellow pearls.

In order to reinforce its Q10 range, Nivea comes with a new serum. It fits with current trend of Serums, but with an added value : a very innovative visual, which vehiculates novelty and efficacy. Nivea is the first to launch this technology of soft beads among the big player of Mass Market. The visual is truly different, but the claims are standard, and the beads are not making the formula more efficient. Other brands are also playing with the visual of their products to attract consumers, like Garnier with its Ultralift 2-in-1 Serum + Cream, or Olay with its Total Effects CC Cream.

This new formula is claimed by Nivea to reduce wrinkles, smooth skin surface with a silky finish, and refine skin texture. All these claims are standard claims of serums and anti-wrinkles of the competition.

The innovations of this product are its aspect and texture, and that is on what Nivea communicate : it is a transparent gel with suspended soft beads (“pearls”) inside the gel. These beads are claimed to entrap Q10 active ingredient (claimed to be “the highest concentration”). The beads are said to be “activated at each use, melting onto the skin, transforming into a transparent serum”.

The oil phase is made of Cyclomethicone / Dimethiconol.

The formula also contains soft beads that break with shear, probably made of Algin.

Ashland, a major supplier in cosmetic industry, is selling this type of technology of soft beads under the tradename “Captivates“. Ashland soft beads can be made of several hydrogels : alginate, carageenan and/or chitosan.

Nivea’s beads are made of alginate. They are based on the property of Sodium Alginate to form insoluble gel in the presence of Calcium ion (per its INCI list, the Nivea Pearl Serum contains Calcium Chloride). In the trendy Molecular Gastronomy, any edible liquid can be presented as spheres using alginate. This cooking technique is called “spherification“. This very good article gives more details on the science behind alginate spheres.

As any liquid (free of Calcium) can be “spherized”, to build this product, Nivea has made spheres of Q10 solution, and colored them in yellow.

The formula is sold in a pump bottle. When pumped, the formula is sheared through the pumping system, which breaks the soft spheres. Consequently, while looking as a transparent gel full of yellow beads in the packaging, the formula looks as a homogenous texture out of the pack.

The formula is protected against microbiological growth by Methylpropanediol, 1,2-Hexanediol and Phenoxyethanol.