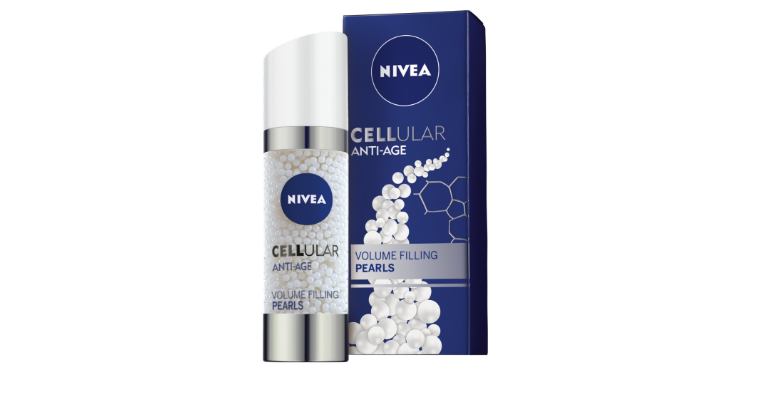 Nivea Cellular is a pillar of the Nivea skincare range, next to the ever lasting Q10 line-up. After extending Cellular with Cellular Eclat, Nivea comes with 2 new products, under the Cellular Anti-Age umbrella, specifically targetting volume :

Let’s read the label of the Pearls Serum. 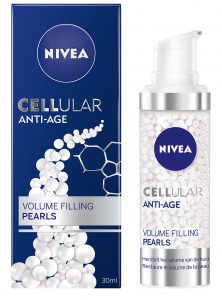 What does Nivea Cellular Anti-Age Volume Filling Pearls do to your skin ?

The main claim of the “classic” Niveal Cellular Anti-Age range is to “accelerate skin regeneration”.

The new ingredient of the Volume Filling duo is the Collagen Booster. Hyaluronic Acid and Creatine were already used in the “classic” Nivea Cellular formulas.

What is it made of ?

The “pearl” technology used in this product is exactly the same as the one used in the Nivea Q10Plus Serum Pearl. The INCI lists of these two products are very close (except the active ingredients). Here after the INCI list of the Q10Plus formula :

The patent gives an example formula that let us know which ingredients of the INCI list are in each phase of the formula. This has been highlighted in the ingredient list above in the article :

This phase is an O/W emulsion based on Evonik TegoCare 450 (Polyglyceryl-3 Methylglucose Distearate) with oil phase made of silicones only (BRB CM 56 (Cyclomethicone), Xiameter PMX 1501 (Cyclomethicone (and) Dimethiconol) and PSQ Gransil (Polymethylsilsesquioxane), encalpsulated in Calcium Alginate (Algin reacting with the Calcium Chloride CaCl2 from the outer phase).

This Pearl technology is based on the specific properties of Alginate. Alginic Acid or Alginate is an anionic polysaccharide coming from brown algae. Alginate is a long, negatively charged molecule. Positively charged Sodium ions (Na+) dissociate from the alginate when dissolved to create liquid solution. When associated to Sodium, alginate forms a very flexible chain. However, when Sodium is replaced by doubly charged Calcium ions (Ca 2+), Calcium binds two different alginate strands simultaneously, crosslinking and solidifying the solution. Drop of Sodium Alginate falling in a solution of Calcium Chloride will create beads with an external envelope of Calcium Alginate. The industrial process of production for such beads is discribed in this patent DE4424998A1, cited in Beiersdorf patent about the Pearl technology.

When the consumer uses the product and pushes the pump, the bulk is sucked in the dip tube, and the pump mechanism breaks the beads to deliver a homogeneous opaque formula. In its PR document, Nivea talks about a “Jet Cutter” technology. 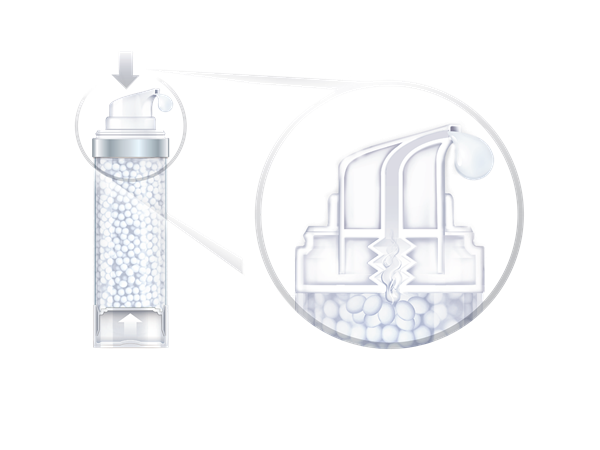 Water is used in both phase, but also the preservative system, made of Phenoxyethanol, 1,2-Hexanediol and Methylpropanediol.

The patent is specifically protecting the presence of Ubiquinone (chemical name of the Coenzyme Q10) in the algin capsules, argueing that the capsules preserve and protect this active ingredient against oxidation and UV filters. As can be seen in the INCI list, there is no Ubiquinone in the Nivea Cellular Anti-Age Volume Filling Pearls. The patent is consequently not protecting this formula. However, the pack states “Patent Pending”. It is probably the one covering the use of Creatine and Creatinine in skincare.

The benefits of Volume Filling Pearls are not new. There are other anti-aging products on the market targeting volume and contours.

In terms of technology, it is not new neither, as it is the same technology as the one used on the Nivea Q10Plus Pearl Serum launched in 2014, with different colors and active ingredients.

However, this technology however remains very impactful on the shelves, and vehiculating innovation with its stricking visual.